Bear Grylls, Chris Zook to take mainstage at ONE: The Alltech Ideas Conference 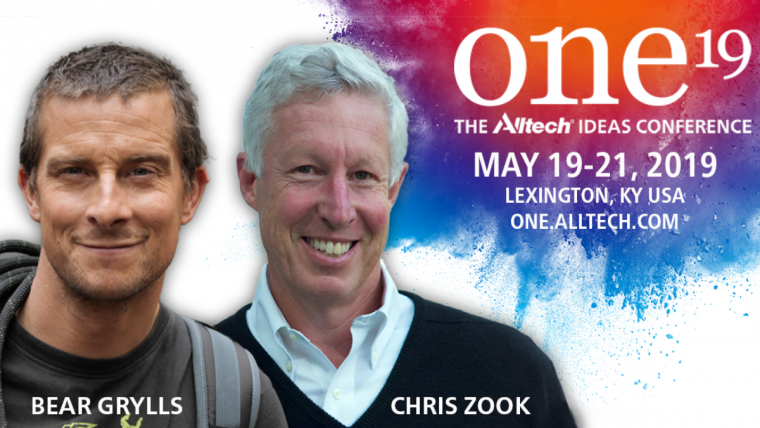 Bear Grylls, adventurer and survivalist; and Chris Zook, best-selling author and leadership adviser, will take the mainstage at ONE: The Alltech Ideas Conference (ONE19) in Lexington, Kentucky, May 19 – 21, 2019.

ONE: The Alltech Ideas Conference (ONE19) returns May 19–21, 2019, in Lexington, Kentucky, to welcome everyday heroes united by the search for inspiration, motivation and ONE meaningful idea. ONE19 is a unique global conference that transcends culture and industry, presenting innovation-driven solutions for overcoming challenges in agriculture, business, health and wellness, brewing and distilling, and everyday life.

Bear Grylls, one of the most recognized faces of survival and outdoor adventure, will take the ONE19 mainstage. Grylls starred in seven seasons of the Discovery Channel’s Emmy Award-nominated “Man vs. Wild” television series, which became one of the most watched shows on the planet. The BAFTA award-winning host trained in martial arts from a young age, and his survival skills were later perfected during his service in the 21 Special Air Service Regiment. When a free-fall parachuting accident left him with a broken back, Grylls’ grit and determination guided his long recovery. He went on to become one of the youngest people to reach the summit of Mount Everest.

Grylls is a number one best-selling author, an honorary colonel to the Royal Marine Commandos, the youngest ever U.K. Chief Scout and the first Chief Ambassador to the World Scout Movement, representing a global family of 50 million Scouts.

Joining the lineup is Chris Zook, best-selling author of books on leadership and business strategy and an advisory partner at the renowned consulting firm Bain & Company. Zook specializes in guiding companies to find new sources of profitable growth and renew themselves internally to become more adaptive and entrepreneurial. He was included by the Times of London in its biannual list of the “50 Most Influential Global Business Thinkers.” He was also named “one of the most interesting strategic thinkers working today” by “The Financial Times Guide to Strategy.”

Alltech’s flagship conference is attended annually by nearly 4,000 people from over 70 countries who gather to dream bigger and explore solutions to improve their businesses and the world around them. The conference experience extends beyond superior presentation content, as attendees are invited to embark on area tours throughout the Bluegrass State and network with peers from across the globe.

While world-class speakers will light up the plenary stage with universal themes of perseverance and achievement, subject- and species-specific breakout sessions with industry experts give attendees an opportunity to explore their particular fields, including aquaculture, beef, crop science, dairy, pig, poultry, equine, health and wellness, business, and brewing and distilling. Additional ONE19 speakers and session topics will be announced shortly.

Learn more and register at one.alltech.com by Jan. 31 to save $300. Follow ONE19 on Facebook for updates and to join the conversation.