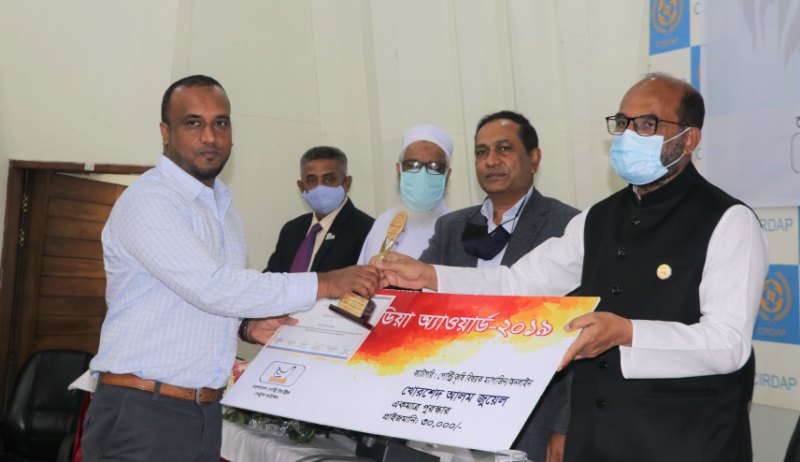 Staff Reporter: For the second time in a row Agrinews24.com editor and CEO Md. Khorshed Alam (Jewel) won the ‘Poultry Media Award-2019’. He won the only award for the second time in the Poultry and Agriculture Magazine /Online category. Earlier, he won the ‘Poultry Media Award-2018’. Minister of Fisheries and Livestock of the Government of the People’s Republic of Bangladesh SM Rezaul Karim, MP, handed over the prizes, certificates and prize money to Jewel on Sunday (March 21) as a chief guest. Bangladesh Poultry Industries Central Council (BPICC) called for the submission of various reports on poultry published in 2019 and announced the award. The award was supposed to be given in the year 2020, but it was given this year (2021) due to the Corona epidemic.

Referring to journalism as a great profession, Fisheries and Livestock Minister Sham Rezaul Karim, MP, said, “The media is called the fourth pillar of the state. The media plays an important role in running the state system. I have a spiritual relationship with the media. Although I can’t give awards to all the journalists who work in the fisheries and livestock sector, I love and respect them in my heart. But we also have to be careful about misinformation.”

Secretary of the Ministry of Fisheries and Livestock Rawnak Mahmud said that, the news value of the fisheries and livestock sector has increased more than before. He said, “We have noticed that after a few days, propaganda about eggs, milk, fish and meat has started. The role of mass media is very important to prevent this propaganda and to raise public awareness.

In a response to the agrinews24.com editor and ceo Md. Khorshed Alam (Jewel) said, “Recognition of any work is always a joy, But some joy increases responsibility. The Poultry Media Award has further enhanced my responsibility towards the people of the country and the poultry industry. I am grateful to the BPICC family for recognizing and honoring the sector I have been working with for over a decade and a half. I wish blessings to all so that I can work better.”

Md. Khorshed Alam (Jewel) previously served as the managing editor of the popular agricultural monthly magazine in Bangaldesh named FarmHouse. His various articles on agriculture and poultry have been published in various national dailies and magazines so far. He is the office secretary of the Agricultural Reporters Forum (ARF), Bangladesh and a member of The International Federation of Agricultural Journalists (IFAJ).